Who Are America’s Coupon-Clipping Champs? 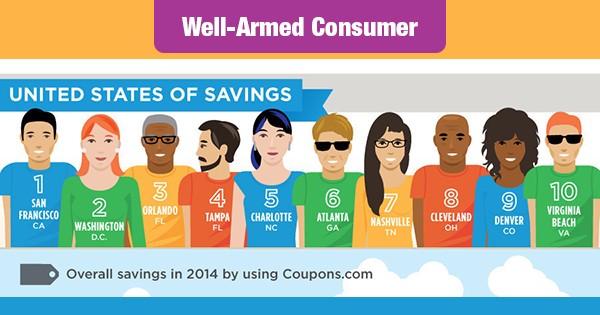 A new report show’s which American city’s residents are the most frugal, and the findings may surprise you.

It turns out that residents of San Francisco have topped all other city dwellers in the U.S. as the coupon-clipping champions of frugality in these United States.

Coupons.com , (who would know about these things), released its 2014 Most Frugal Cities list recently. The rankings are based on data from the company’s site.

For 2014, San Francisco moved from the #14 spot to capture the crown – edging out last year’s winner, Orlando.

According to the report, San Franciscans saved more than $56.6 million in savings from Coupons.com.

But the questions is: why did this famously affluent city rise to become the #1 place for coupon-clippers?

With expenses like these, even a healthy income gets stretched. It’s safe to say that, in San Francisco, even an $80k per year salary isn’t enough to make a person feel care-free with their grocery budget.