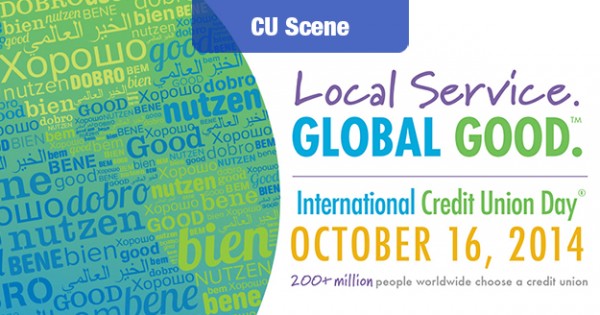 Since 1948, the third Thursday in October has been designated as International Credit Union (ICU) Day, with the World Council of Credit Unions acting as MC. This is the day to celebrate the international credit union movement in all its not-for-profit glory.

For ICU Day 2014, the theme is: “Local Service. Global Good.” We think it emphasizes how credit unions around the world are community-focused, but work together to bring credit union values to the wider world.

Part of the Council’s mission on this day is to remind people of the history of credit unions. Did you know that the idea for credit unions sprang from 19th Century European cooperatives? The first credit union was started as a “people’s bank” in Germany, and was founded in response to devastating crop failures and famine during 1846–1847.

Credit unions were started to serve entrepreneurs and farmers, along the principles of cooperative interdependence, a community-first mentality and a volunteer management structure. These values can still be seen in today’s credit union movement.

The concept eventually spread to North America, and was taken up by Edward A. Filene and Roy F. Bergengren in the United States. The first official holiday for credit union members and workers was held on January 17, 1927, by the Credit Union League of Massachusetts.

January 17 was chosen because it was the birthday of America’s “Apostle of Thrift,” Benjamin Franklin. According to the World Council of Credit Unions, early American credit union founders believed that Franklin symbolized “the life and teaching embodied in the spirit and purpose of credit unions.”

While that early celebration day was eventually dropped, the idea of having a day to celebrate credit unions never really left. In 1948, the U.S. Credit Union National Association (CUNA) decided to initiate a new national Credit Union Day – to be held on the third Thursday of October (sorry, Ben).

As credit union members, this is your day to bask in the people-first, community-focused movement that you are a part of.