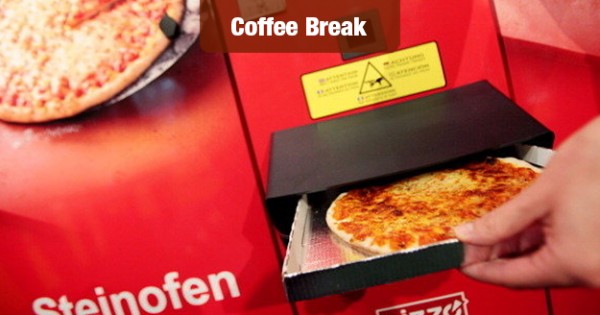 When we think of vending machines, rows of chips, candy bars and other junk food comes to mind. They are the last resort for the hungry, and things to be strictly avoided for the health-conscious. However, a new breed of vending machines is challenging the stereotype.

According to The Lempert Report, vending technology innovators have upped their game to capitalize on the opportunities presented by on-the-go consumers who want quality food.

The firm, in its weekly video series, highlighted Let’s Pizza, a vending machine that promises designed to make pizza from scratch in 2.5 minutes. Developed by Italian Claudio Torghel, the machine contains a specially-developed bag of flour and a bag of mineral water.

When you order a pizza, Let’s Pizza makes the dough from scratch, shapes it into a crust and tops it with organic tomato sauce, the maker said. Toppings are then placed, and the pizza is cooked in an infra-red oven. Let’s Pizza made its U.S. debut in 2012.

Another vending concept highlighted by Lempert brings lettuce farming into urban jungles around the world. Developed in Japan, The Chef’s Farm vending machine actually grows lettuce on-site, and then dispenses it to consumers.

This machine uses special fluorescent lighting to produce 60 fresh heads of lettuce per day in a hydroponic environment – all without needing sunlight. The machine’s maker, Dentsu, said it can produce 20,000 heads of lettuce per year, and can be stored in a restaurant. The Chef’s Farm machine can also grow other kinds of vegetables, its maker said.

Finally, Lempert brings word of the Beverly Hills Caviar vending machine which, as the name implies, dispenses those expensive fish eggs so prized by gourmands the world over.

These machines – which began cropping up in posh Los Angeles retail settings in 2012 – offer different grades and amounts of caviar at prices ranging from $5 to $500.

According to an NBC News report from that year, a $500 deposit into the machine would get you one ounce of Imperial River Beluga Caviar. While the price of the Beverly Hills Caviar vending machine is hefty – at around $85,000 per – the inventory it contains is worth a staggering $50,000. That’s more than the average vending supply truck is carrying on its rounds.

Heady stuff, these innovations — and maybe the sorts of things that will change your view of vending machines one day. For now, though, most of the ones we see are still filled with junk food and sodas. Their wares may be less-than-fresh — and decidedly unhealthy for the most part — but you can get them for less than $500.