There Will Be Acid 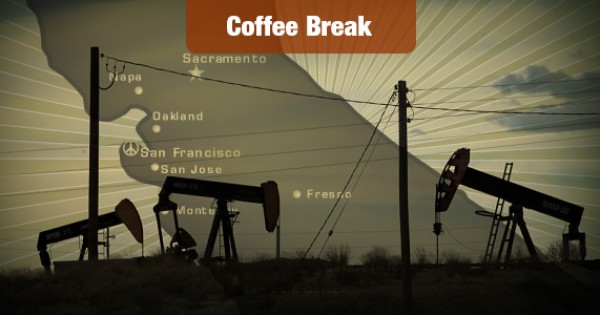 Have you noticed that the practice of fracking for gas and oil has been controversial lately? Just wait until oil companies start pouring tons of dangerous acid into wells to get at oil reserves trapped in shale. This is what may soon be happening in California, according to a couple of recent articles.

Articles on the nonprofit site takepart.com and CNNmoney both say that shale oil reserves in California may dwarf even those that are creating oil booms in other parts of the country. One potential shale “play” in the state – the Monterey Shale – may contain as much as 400 billion barrels of oil in an area running from Los Angeles to San Francisco. Those are Saudi Arabia-type numbers, and a big lure for a country addicted to oil and a state that’s suffering from huge budget deficits and high unemployment. But there’s a catch: While hydraulic fracturing (or fracking) has been successful at getting shale oil in other parts of the country it won’t work as well in California’s unique geology.

Fracking involves injecting pressurized water and chemicals into a well-bore in an effort to break up shale and release trapped oil. It works well enough in places like the Bakken Formation in North Dakota and Texas’ Eagle Ford Shale that US oil production has experienced a boom in recent years. Fracking is hugely controversial, though, largely due to the potential environmental impact of pouring chemicals into the ground and possibly contaminating ground water, among other things.

But even if communities in environmentally-conscious California would accept a huge increase in fracking in their back yards, (a big if), the practice isn’t very well suited to the geology of the Monterey Shale. As CNN Money put it, “As a result of the San Andres fault, California’s geologic layers are folded like an accordion rather than simply stacked on top of each other like they are in other Shale states.” This makes it harder to drill and use fracking methods to get at the oil layered in the shale. Fracking also uses a lot of water – something drought-affected California doesn’t have a lot of to spare. Enter “acidizing” as a fix.

With acidizing, oil companies pour industrial-strength acid into a well bore in an effort to dissolve rock and sediment, so trapped oil can be released. The practice has been around for years as a way to stimulate new production from “played out” oil wells. But traditional acidizing uses relatively small concentrations of acid; what’s being proposed for the Monterey Shale involves a whole other level of acid injection, using a very aggressive type of acid.

The type of acid being proposed for Monterey production is hydrofluoric acid, and it’s very nasty stuff. Hydrofluoric acid will not only burn tissue on contact, (including, if breathed in, lung tissue), it also has the ability to penetrate tissues and cause internal damage in victims. So, breathing in or coming in any contact with hydrofluoric acid can be deadly. But the very nastiness of the stuff also lends it the ability to effectively dissolve rock, hence its use in shale oil production.

Believe it or not, acidizing is being sold as an environmentally safer alternative to conventional fracking. According to statistics cited by takepart.com, a typical acidizing operation would use between 750 and 2000 gallons of water, with acid and other chemicals making up around 15% of the solution. Safer? Just drink in those numbers, (better yet, don’t). This could mean hundreds of gallons of hydrofluoric acid being poured into a hole in the ground. Picture this happening at hundreds, or thousands, of drill sites.

The image of this keeps environmentalists up at night. They wonder: Can the acid be effectively recycled? Will acid fumes get into the atmosphere around the drilling site? Will local groundwater supplies be contaminated? These are just some of the questions now being asked in the Golden State. But if the state’s rich history is any guide, big oil — and its promise of big money — may just win out over such concerns.

Many Americans don’t know that California is still the third-largest oil producing state. In the state’s early 20th-Century heyday it led the nation in oil production. There are still thousands of active wells scattered throughout the state – (pumping, pumping) — even in heavily populated places like Beverly Hills and Downtown Los Angeles. Watch the 2007 Paul Thomas Anderson film There Will be Blood and you get a sense of what California oil mania was like in the early days. (Better yet, read the Upton Sinclair’s novel, Oil!, which the movie was based on.) The oil industry still has a lot of power in California, and the state’s current financial woes may indeed make the industry’s slick, golden handshake too hard to resist. After all, oil boosters point out, Californians do drive a lot.