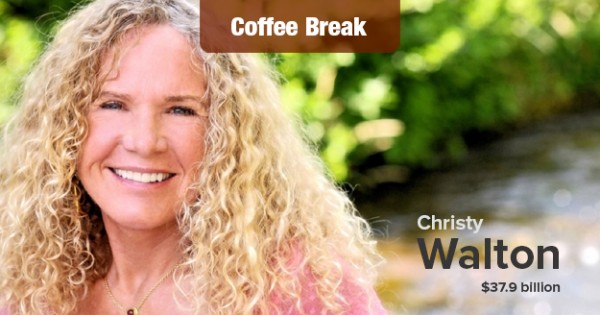 The world’s richest women control $114.6 billion of personal wealth among them, and hail from the U.S., Latin America, China and other parts of the world, according to a new study.

Wealth-X – a company that collects intel on the mega-wealthy — said that there are 286 female billionaires in the world, accounting for around $7.3 trillion in personal wealth. They make up around 12.8% of the world’s billionaires.

Right at the top of that population is Walmart heiress Christy Walton, whose net worth is estimated to be $37.9 billion as of this year.

Frenchwoman Liliane Bettencourt, heiress to the L’Oreal cosmetics fortune, is ranked #2 on the list, with a personal fortune worth $31.3 billion. Bettencourt, at age 92, does rank as the oldest woman on the list.

The three daughters of Mexican billionaire Carlos Slim are each worth around $6.3 billion – making them the richest women in Latin America.

China’s Yang Huiyan, (age 33), is the youngest women on the list. She acquired her $4.2 fortune as a result of her father, Chinese real estate mogul Yang Guoquiang, transferring 70% of the shares in his company, Country Garden Group.

When his company went public in 2007, Yang Huiyan’s fortunes soared, and she became one of the richest women in Asia.

The rest of us not-billionaires can but sit back and marvel at these vast fortunes.