The Apple Watch is More Powerful than It Looks 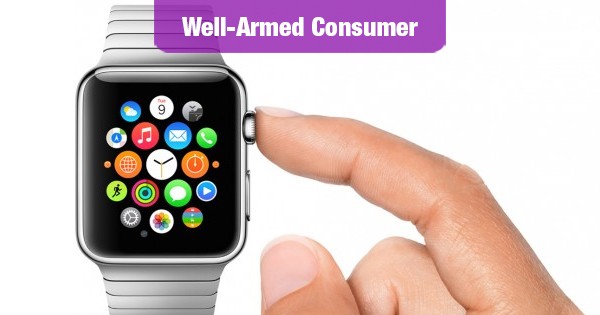 Apple unveiled its new line of smart watches last week, and the reaction they received was decidedly mixed. While some people were impressed with the new devices, others proclaimed them to be niche products, or even gimmicks. No one, it seems, saw The Future in these devices. Here’s why they may be wrong.

The new Apple Watch, like other smart wearables, interacts with your larger mobile device, (an iPhone, it this case). It acts as a traditional timepiece, but also has a range of cool features that are unique to the watch:

There are other features, but you get the picture. It’s all cool stuff, but nothing life-changing, hence all the “meh” reactions we heard last week.

To understand the true potential of Apple Watch, however, you have to think of how things are changing in one crucial, everyday aspect of our lives: how we buy things.

There’s a revolution coming in the way we lead our consumer lives, and Apple Watch, (and wearable devices like it), will become everyday necessities of modern life for millions of Americans.

While this prediction sounds all big and bold, the reason for it is really quite simple: in the very near future we aren’t going to use physical cards or currency to buy things anymore, yet we’ll need to interact with our payment systems all day, every day. And we’ll want to have our hands free as we shop.

Wearable devices fit the bill perfectly, since they allow us the freedom to use both of our hands, while keeping us connected to our various accounts.

They work beautifully with the retail world we’re moving into. This is a world that’s not only cashless, but also free of checkout lines. We will shop online and offline simultaneously, and make purchases with the push of a button.

“Sure,” you might say, “but why the Apple Watch? Why wouldn’t any wearable device work just fine?”

The Even Bigger Deal

This is a good point – and it would be a decisive one but for the fact that Apple Watch is backed by Apple. And Apple is the only non-governmental entity we can think of that is worth more than 900 billion dollars. The company has a massive $178 billion of cash on hand — enough to pay every man, woman and child in America more than $500 a piece.

Having that kind of money allows Apple to seriously disrupt the payments ecosystem as it exists today. Apple could make it worthwhile for every financial institution – and every retailer — in the country to partner with the company, and allow consumers to use Apple systems to buy things.

Now, we don’t know if Apple is actually going to use its great power for these purposes. This is guesswork. But it’s worth pointing out what the company could do if it chooses to take the path of global domination. And there is some evidence to suggest that what they have in mind isn’t far from this scenario.

Consider that in the past year Apple has launched its own mobile payments system – Apple Pay – and now its own wearable line. These innovations come in addition to the company’s already formidable array of mobile and online retail assets and capabilities.

It surely isn’t far-fetched to think that they may have even bigger things in mind.