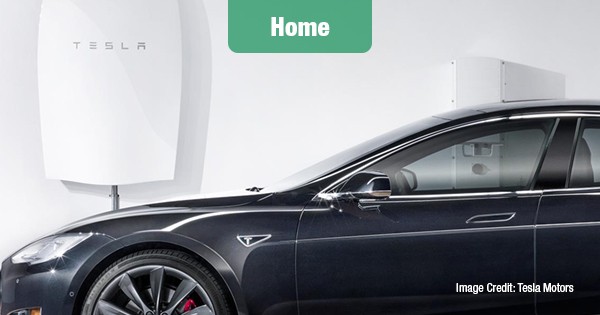 Tesla Motors has gotten a lot of press for their sleek, fast electric cars, but the company has aimed to be more than just a car company. This month’s release of the Tesla Powerwall Home Battery illustrates this.

The Powerall is a powerful battery pack wrapped in a stylish housing. It’s designed to made solar power more practical for homeowners by storing the electricity produced by PV solar panels for later use.

As Tesla points out, the average home uses more electricity in the morning and evening than during the day, when solar energy is plentiful.

The trick, then, is to store the energy generated during the day for use during the times when the family is at home, and electricity use is greater.

Powerall comes in 10 kWh weekly cycle and 7 kWh daily cycle models, so they store a lot of energy. By making the packs stylish-looking, Tesla aims to make energy storage a welcome addition to the home.

The packs are big, but not so big that they can’t be mounted on a garage or basement wall. Multiple packs can be used to maximize the energy storage capacity of the home system.

Tesla has done a great job of addressing the traditional shortcomings of solar battery systems. Instead of having a huge stack of ugly car batteries in their homes, users get sleek-looking walls of power. Plus, they bear the Tesla name, so there’s an association with the company’s expensive, high-tech cars.

It looks like the company has hit a home run with the Powerall: just a week into the Powerall’s market release, Tesla CEO Elon Musk said that his company had already received 38,000 reservations for the packs.

It remains to be seen how well these storage solutions work in the marketplace. Will they inspire more people to go solar? Will they perform as advertised? We’ll see – but the initial success of the Powerall concept should have Tesla feeling optimistic.