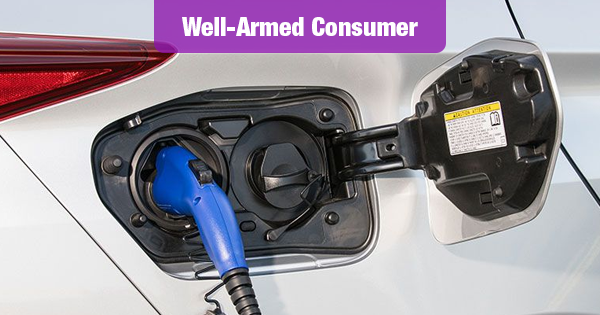 Earth Day just took place, and we’re betting that many folks were thinking about the environment. So was Kelley Blue Book.

Accordingly, the vehicle comparison experts at KBB took a look at plug-in hybrids.

Plug-in hybrids run on efficient electric power, a gasoline engine, or the combination of both, and today there are more plug-in hybrid models available than ever before from luxury SUVs to simple, no-fuss commuter cars.

“Plug-in hybrids stand out for most buyers because they can plug into a regular wall socket, charge overnight, and get drivers to their job the next morning on pure electric power with zero tailpipe emissions,” said Karl Brauer, executive publisher for Kelley Blue Book. “These vehicles offer clear advantages for smarter commuting, superior fuel economy and good highway manners.”

The Chevy Volt entered its second generation in 2016 and became the better for it. It gained range in both all-electric driving (53 miles) and total distance, five-passenger seating versus the previous four, enhanced technology such as an infotainment system ready for Apple CarPlay and Android Auto, and a sleek new design. Power is perfectly acceptable for this class, and we’ll go as far as saying the Volt even packs a punch when electrons are doing the work. In all-electric mode, the Volt has the satisfying acceleration associated with an electric vehicle (EV). Mash the throttle and Chevy’s plug-in electric vehicle scoots.

“It takes about as long to adjust to driving the Clarity as it takes to get used to a Honda Accord. While its styling is admittedly quirky, the Clarity is much like any other sedan in most ways, but with the added bonus of 48 miles of electric-only driving.

That’s why we named the 2018 Honda Clarity PHEV a 2018 Kelley Blue Book Best Buy Award winner in the Electric/Hybrid Car category. The nicely appointed interior uses attractive, quality materials, and the controls are well laid out and within easy reach. The Clarity has a comfortable ride, which adds to the car’s pleasant demeanor on the highway.”

“The 2018 Hyundai Ioniq Plug-In Hybrid stands tall as the most everyday car in this test. From a practical plug-in-hybrid point of view, the gasoline/electric PHEV version of the Ioniq got fan notes from every driver in our test.

We universally agreed that for a 5-passenger hybrid hatchback that starts at just $25,835, the Ioniq had an inside line when it came to value. Standard features at that price include body-color exterior trim pieces — including heated outside mirrors — and a gift basket of interior features like heated front seats, a rearview camera, and dual-zone climate control.

For the media junkies, a 7-inch touch-screen display and Apple CarPlay/Android Auto are also included. Throw in a $4,500 federal tax credit and a 10-year/100,000-mile warranty on the hybrid powertrain, and you’ve already got a pretty good lock on value.”

“Toyota’s second crack at a plug-in hybrid in its pioneering Prius lineup brings enough differentiation in both styling and performance to warrant a serious look at this vehicle for those who want the best of both the pure electric and hybrid worlds.

While the 2018 Toyota Prius Prime doesn’t have the same all-electric range as its archrival Chevrolet Volt, it does offer 25 miles of pure EV mode, plus an impressive 54 mpg EPA combined fuel-economy rating when it’s running as a conventional hybrid (the agency gives it a 133 MPGe rating when both modes are combined). On our road trip, the Prius Prime went more than 475 miles on a single tank with an overall mpg of 54.3 mpg.”