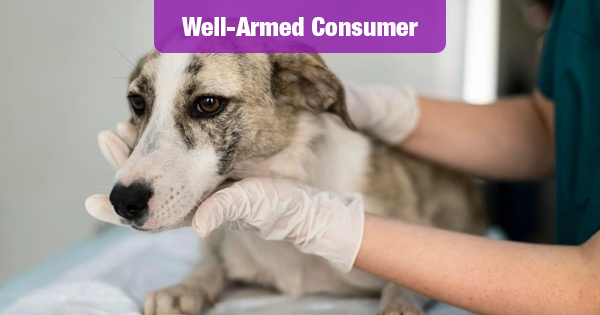 Most dog owners know that chocolate is dangerous to pets. What they don’t expect, however, is for their dog to eat more than four pounds of the tempting treat. That was the situation when Randi Stats’ Labradoodle Charlotte ingested the majority of a 4.5-pound bag of Kirkland Signature Semi-Sweet Chocolate Chips.

When Stats returned home from work, she found the empty bag and several areas where Charlotte had vomited with significant chocolate evidence.

“A couple of months before she ate the Costco-sized bag of chocolate chips out of the pantry, Charlotte had been losing a lot of weight,” said Randi Stats, Charlotte’s owner.

Stats’ family lives in Bountiful, a suburb of Salt Lake City. “She was so hungry and ravenous, and we couldn’t figure out why. When I found the empty package on the floor, I wasn’t surprised because she had been scrounging for food, but I panicked because I know chocolate is very dangerous for dogs. We tried to take her to our local veterinarian, but her condition was too severe, so we rushed to the MedVet Salt Lake City emergency hospital. In the process of treating her for chocolate poisoning, they were able to determine that Charlotte had been suffering from exocrine pancreatic insufficiency (EPI).”

EPI is a condition characterized by deficiency of exocrine pancreatic enzymes, resulting in the inability to digest food properly, or maldigestion. “Basically, she was starving to death, and we didn’t know it,” added Stats. “Eating the chocolate was actually a blessing in disguise because it probably saved her life. If they hadn’t diagnosed her EPI, we would have lost her to starvation.”

“This is an extremely toxic and potentially fatal dose of chocolate,” said Dr. Ahna Brutlag, a board-certified veterinary toxicologist at Pet Poison Helpline. “The good news is that Charlotte’s owner called our toxicology experts before heading to the emergency veterinarian, so by the time that they arrived a treatment plan was already being developed.”

When Charlotte arrived, she had an increased heart rate and was trembling and weak. The veterinarian induced vomiting again.

Because there was a concern for gastrointestinal, cardiac, and neurologic issues, the Pet Poison Helpline team recommended that Charlotte stay overnight for observation. The hospital also administered activated charcoal to bind to any remaining chocolate in her system as well as intravenous fluids to offer hydration support.

“Treating Charlotte’s chocolate poisoning was much more complex than treating her EPI,” added Stats. “Remarkably, EPI is very simple to treat with over-the-counter supplements. She has since gained back all of her weight, and more!”

Although Charlotte didn’t sneak her treat during Halloween, many pets do get into their family’s candy buckets after the night’s festivities. In addition to chocolate, pet lovers should keep any candy sweetened with xylitol away from their animals.

“Xylitol consumption by dogs can be extremely toxic and potentially deadly,” explained Brutlag. “The most common effect of xylitol poisoning in dogs is a precipitous drop in blood sugar. Because of this, seizures and body tremors can occur, which can lead to death if not treated. Larger ingestions can also result in potentially fatal liver failure hours or days afterwards.”

Another common Halloween danger is glow sticks and glow jewelry. This time, cats are more likely to get into trouble than dogs.

Pet Poison Helpline analyzed glow-stick related cases over the last two years and found that two thirds of reported cases involved cats, and the area with the most cases reported was Ontario, Canada.

While generally not lethal, ingesting a glow stick’s contents can cause gastrointestinal signs including oral irritation and excessive salivation. Some cats may also become lethargic or shake their head due to the odd taste and sensation in the mouth.

Finally, one of the greatest dangers facing your pet during Halloween is getting out of the house or away from trick-or-treating children and into other dangers such as being hit by a car or being taken.

Pet Poison Helpline has partnered with AKC Reunite, the nation’s largest not-for-profit pet recovery service, offering its 24/7 toxicology expertise as an optional, unlimited benefit for its members to add to their pet’s lifetime protection.

As a cost-effective option for animal poison control care, Pet Poison Helpline’s fee of $65 per incident includes follow-up consultations for the duration of the poison case. Pet Poison Helpline is available in North America by calling 800-213-6680. Additional information can be found online at www.petpoisonhelpline.com.