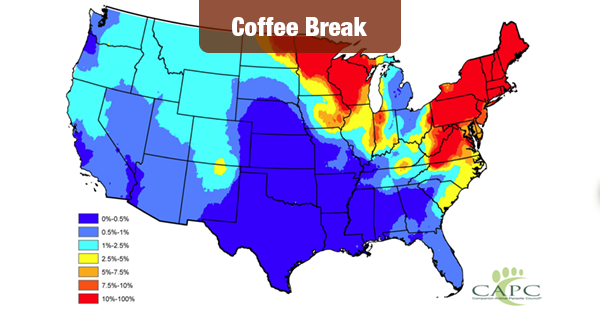 From 2007 to 2016, private insurance claim lines with diagnoses of Lyme disease increased by a startling 185 percent in rural areas and 40 percent in urban areas, according to data from the nonprofit FAIR Health organization, which is focused on bringing transparency to healthcare costs and health insurance information.

FAIR Health data from the period 2007-2016 confirm findings by the Centers for Disease Control and Prevention (CDC) that summer is the peak period for Lyme disease diagnoses, as reflected in claim lines with such diagnoses.

But rural and urban areas differ.

Age also was a difference between rural and urban settings. In rural settings, claim lines with Lyme disease diagnoses were more common for middle-aged and older people: individuals aged 41 years and above accounted for 62 percent of the rural diagnoses.

But, in urban populations, younger individuals accounted for a higher percentage of claim lines with Lyme disease diagnoses.

Although Lyme disease historically has been concentrated in the Northeast and upper Midwest, FAIR Health data suggest that it is spreading geographically.

Lyme disease is treatable with antibiotics, but some patients go on to develop post-treatment Lyme disease syndrome (PTLDS), sometimes called chronic Lyme disease, with long-term symptoms such as fatigue, muscle and joint pain and cognitive issues.

Autoimmunity has been suggested as a factor in PTLDS. FAIR Health performed a retrospective longitudinal study, examining private insurance claims from a statistically significant cohort of individuals from 2013 to 2017.

For patients who had a Lyme disease diagnosis, the most prevalent subsequent diagnoses were:

Find out more at Fair Health..