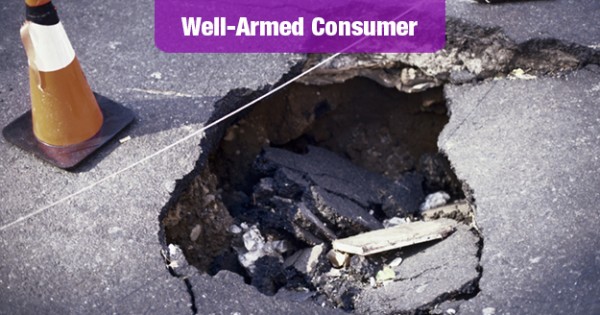 The after-effects of last winter’s harsh weather are still being felt, at least in one Northeast state.

Plymouth Rock Assurance said it is seeing a sharp increase in pothole-related claims in New Jersey over the past year.

If you’re seeing (and feeling) more potholes in the roads you drive this year, Plymouth Rock has some advice to offer:

Keep enough space between you and the vehicle in front of you. This allows you time to see and avoid potholes.

Also, keep your tires properly inflated, since tires that are under-inflated are more prone to allowing the tire to bottom out quickly onto the rim during collision with a pothole. This can greatly increase the chance of damage from hitting a pothole.

Take it slow at night, since potholes are more difficult to see during nigh-time driving. Also, by reducing speed you are both increasing your options for avoiding potholes, and lessening the damage they do when you can’t avoid them.

If a pothole appears in your path, try to go around it. But first check that there isn’t another vehicle in the space you would be moving into. When breaking to avoid a pothole, go easy: slamming on the brakes can increase downforce and the possibility of damage.

Hopefully, road crews will soon have the potholes created by last winter’s brutal weather filled. In the meantime, keep your eyes peeled.