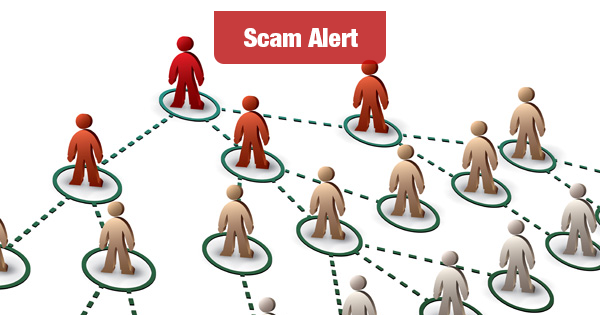 The hard economic times we’ve had in recent years have brought all kinds of scammers and crooks out of the woodwork. Many of these criminals have preyed on the financial desperation many Americans experienced, and offered them what seemed like easy money. One of their favorite scams is the classic pyramid scheme.

A pyramid scheme involves an organization that a person joins by making a payment. The person is then tasked with recruiting other new members to join, with the promise that he or she will get a percentage of the up-front money collected from the new members recruited.

These schemes are sometimes set up as investment clubs, but most often they involve selling some type of product. The new members are charged an up-front fee to “buy in” and get the products, but the main way they can make money is by bringing new members in.

While people are lured into pyramid schemes with pitches offering big money, and freedom from their 9-to-5 jobs, what they usually wind up with are empty pockets and disappointment.

In order to help you avoid these scams, Alvaro Puig, a Consumer Education Specialist at the Federal Trade Commission, put together these “telltale signs of a pyramid scheme.”

1: Recruit, recruit, recruit. If your income is based predominantly on how many people you recruit into the program, not how much product you sell, it’s a pyramid scheme.

2: Buy our product, lots of it. Many pyramid scheme operations require participants to buy the product or other things to stay in good standing with the company.

3: Live the lavish lifestyle. The recruitment pitch says you’ll be living in the lap of luxury. It fails to tell you most people in a pyramid scheme lose money.

The economy has improved a lot since the darkest days of the recession, but there are still plenty of scams being pitched to the unwary.

So, be on your guard, and remember these tips.