How Not to Quit Your Job 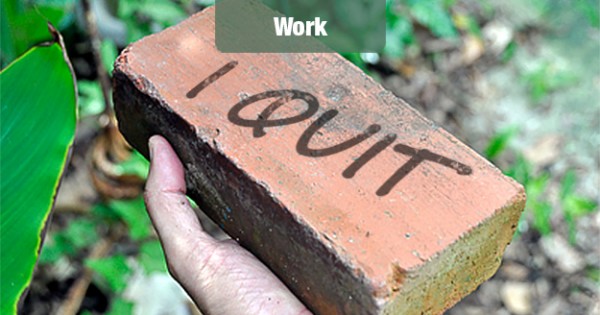 Human resources professionals say that how you quit your job can affect your future career opportunities, according to a new survey from OfficeTeam. So, is throwing a cup of coffee and storming out really not right way to do it?

Believe it or not, that is precisely how at least one of the HR pros surveyed described how an employee left a job. Some other “worst of” ways of giving notice revealed by the OfficeTeam survey included:

“An employee baked a cake with her resignation letter written on top.”

“A marching band accompanied one guy in his announcement.”

“The worker threw a brick through the window with the words ‘I quit’ written on it.”

“An employee left a sticky note explaining he was quitting.”

“The individual sent an email blast to all staff.”

“One employee bragged to his colleagues that it was his last day, but failed to let the HR manager or his boss know.”

“One woman created a music video to explain she was leaving.”

While some of these methods are indeed creative, none are likely to get the offending employee a strong recommendation for his/her next job. It’s also true that things done in the heat of the moment have a way of following you around in life. So be careful.

OfficeTeam executive director Robert Hosking suggests that you, “Schedule a meeting with your manager to discuss your resignation, and give at least two weeks’ notice. Keep conversations positive, tie up loose ends and help train your replacement if one has been identified.”