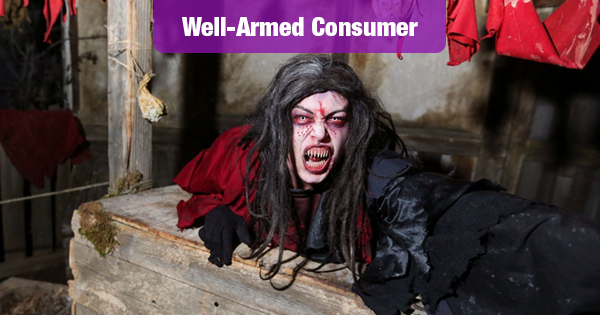 Scaring you at Halloween has become big business. There are more than 1,200 professional haunted houses, 300 theme parks with horror-focused attractions, and approximately 3,000 charity-run spook shows nationwide, according to an estimate from America Haunts, the industry association of haunt attractions nationwide.

Collectively these haunt attractions stir up over $500 million in ticket sales. The most distinguished have a history of brewing up scares through monstrous creativity, investment, and technological expertise for today’s more discriminating consumer.

Here are some of the biggest and best such attractions:

Bennett’s Curse Baltimore, Maryland: A legendary haunt famous for its themed and immersive experiences that are as unique as they are terrifying. Monster Fest, launched in 2018, showcases their unrivaled costume scare cast in even more detailed settings. Visitors experience everything from the classic horrors in Legends of Halloween to the epic scale of Underworld, the immersive world of Inferno 3D, and Ravenbrook Asylum.

Erebus Pontiac, Michigan: This world-renowned four-story fortress of fear provokes blood-curdling screams throughout its half mile walk indoors. Its intense special effects and elaborate sets feature things that will grab, bite, land on top of its victims, and even bury them alive! After years of preying on its victims’ phobias and senses, it is now a staple in Metro Detroit’s Halloween Tradition.

Haunted Hayride and Bates Motel Haunted House Philadelphia, Pennsylvania: An incredible display of terror and mayhem awaits those who enter. The high-tech special effects cater to fans looking for high startle and high action. This haunt puts victims up close to capture the realistic detail and in range to be a victim. Fans feel transported to another time and world, witnessing levitating spirits and moving floor boards. The creepy sixth-sense of being watched is ever-present and the peering animatronic props, including a 20-foot tall rock monster, will blow visitors away.

13th Floor Haunted House Denver, Colorado: In most buildings, the 13th Floor does not exist. But hidden in this building, it’s very real in the form of a haunted house built for haunt enthusiasts’ darkest fears. Legends and nightmares alike will come to life with a gut-wrenching ride to untold nightmares 13 floors straight down. Amphibious creatures and even a rogue nun will trigger fear. This attraction doubles the cast stunts using zip lines, fliers, wall crawls, and sliders to bring scares eye-to-eye with visitors.