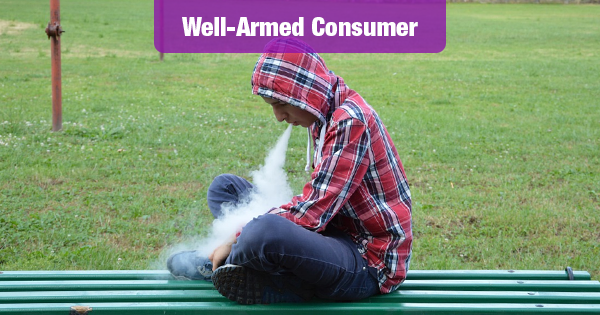 The U.S. Food and Drug Administration has issued four new warning letters to manufacturers and retailers for selling e-liquids used in e-cigarettes with labeling and/or advertising that cause them to resemble kid-friendly food products, such as cereal, soda and pancakes.

One of the companies receiving a warning letter was also cited for illegally selling the product to a minor.

The warning letters follow actions taken last week by the FDA and the Federal Trade Commission against 13 other makers and sellers of nicotine-containing e-liquids that look like juice boxes, candy or cookies.

“Companies putting children at risk or enticing youth use are on notice. If you target kids, then we’re going to target you,” said FDA Commissioner Scott Gottlieb, M.D.

Gottlieb added, “These tactics also hurt the e-cigarette industry and those seeking to quit smoking.”

The products outlined in the new warning letters, and being sold through multiple online retailers, include: “Frank ‘N Vape,” which resembles Franken Berry cereal; “Chill Purple Grape,” which resembles a grape soda can; and “Unicorn Cakes,” which includes images and cartoons of pancakes, a strawberry beverage and unicorns eating pancakes, similar to graphics and images from the “My Little Pony” television and toy franchise.

These warning letters stem from investigations that began in late 2017 of tobacco product labeling and advertising that cause the tobacco products to imitate food products, particularly those that are marketed toward, and/or appealing to, children.

The products are considered misbranded in violation of the Federal Food, Drug, and Cosmetic Act because their labeling and/or advertising imitating kid-friendly foods is misleading.

FDA has requested responses from each of the companies within 15 working days on how they intend to address the agency’s concerns. Failure to correct violations may result in further action such as seizure or injunction.

In addition, misbranded or adulterated products imported into the United States are subject to detention and refusal of admission.

The continuing rise in popularity of electronic nicotine delivery systems (ENDS) such as e-cigarettes has coincided with an increase in calls to poison control centers and visits to emergency rooms related to e-liquid poisoning and other liquid nicotine exposure by children younger than six, according to a recent analysis of National Poison Data System data.

Severe harm can occur in small children from exposure to or ingestion of e-liquids, including death from cardiac arrest, as well as seizure, coma and respiratory arrest, the FDA said.

Find out more at fda.gov.