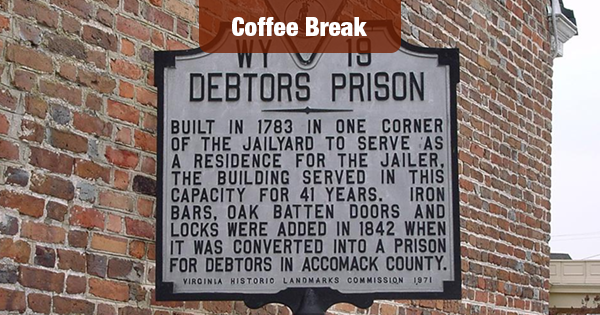 People used to be thrown in jail when they couldn’t pay their debts. In a scandalous tradition familiar to readers of Dickens, debt-burdened folks were once sentenced to terms in debtor’s prisons or workhouses, according to the U.S. Census Bureau.

In Colonial America, some debtors were branded or whipped in public, but most were thrown in jail–debt being the only crime for which long-term imprisonment was common.

But December 1821, Kentucky became the first state to abolish debtors’ prison. The nation followed with a federal ban in 1832.

It’s a good thing, too: shortly after the year 2000, nearly three-fourths of U.S. households were indebted.

That figure has sunk to 69 percent recently, although at the same time the median amount of household debt increased from $50,971to $70,000 in constant 2011 dollars.

While we may no longer have actual debtor’s prisons, being in over our heads in debt can still rob us of our sense of freedom.

If you’re having trouble managing your money, go see your credit union. Your CU can help you to get your finances under control with such things as a debt consolidation loan, or a simple savings plan that can help you to cope with emergencies.

Free yourself of debt.