Credit Unions of the Future 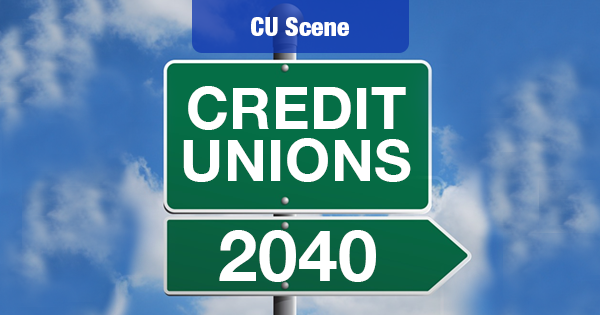 What will your credit union look like in 25 years? Will there even be credit unions then?

These are questions being examined in a new article by Peter Strozniak, writing in Credit Union Times.

Strozniak turned to CU experts to answer them – or at least to speculate. The consensus is that there will be credit unions in 2040, but they will be quite different that the ones we know today.

For one thing, there will be fewer CUs in the future, and the ones that remain will typically be bigger than today’s CUs.

Consolidation in the credit union industry is driven by the need to survive, and compete, with a commercial banking industry that has great resources – and seems to use a considerable amount of them attacking credit unions.

The banks, through their lobbying groups, have been engaged in an all-out assault on the tax exempt status of credit unions. Fighting this fight drains the (much scarcer) resources of CUs.

CUs also have to compete with banks in a number of expensive ways, most recently by deploying mobile banking systems. CUs must do this while operating within a not-for-profit model.

For these and (other reasons), smaller credit unions are finding it very hard to compete. Many find that their best option is to combine with another CU in a merger. Hence, the industry consolidates, and each year there are fewer CUs.

P2P Lenders Will Challenge CUs

New types of financial services firms will pose a huge challenge to CUs. These new financial firms don’t have the overhead of traditional CUs and banks, and they make lending simple and direct.

They will compete with credit unions in areas that CUs depend upon, such as at auto lending – and eventually mortgage and business lending.

So, with all these challenges, how will credit unions survive? Right now, the model for success involves consolidation, but competing with new business models like P2P may require further changes.

The idea of not-for-profit, community-based, member-owned cooperative banking should still appeal to millions of people. But how these mid-century CUs will be organized as companies remains open to speculation.