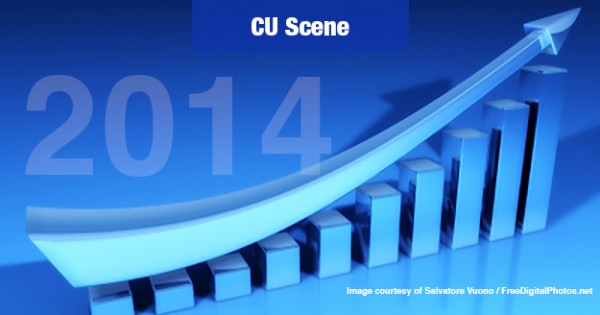 The November Credit Union Trends Report from the Credit Union National Association found that CUs generally increased their lending activity during 2014 as the economy improved. However, several challenges face CUs as we move into 2015.

CUNA reported that credit union loan balances rose faster in the latter part of 2014 than they had during 2013. Overall, CUs saw gains in most forms of lending – particularly auto lending.

Indeed, this tracks with the outstanding year we saw in U.S. auto sales. New and used vehicle sales reached at pre-recession levels in 2014, and credit unions picked up a lot of the financing business from these eager car buyers.

This isn’t surprising, since CUs traditionally offer some of the best deals on auto financing.

Real estate lending has been another story, however. According to CUNA, real estate loans now make up 51.5% of the total credit union loan portfolio. This is the lowest percentage seen since the recession began in December 2007.

Again, this performance tracks the larger economy. Real estate activity increased steadily as the economy recovered. There was a spike in activity in 2013, followed by a weakening in 2014. Overall, the real estate sector has had an uneven recovery, so it’s not surprising that CUs have had some trouble growing this type of lending activity.

Credit union savings balances rose just 3.7% in the 12 months leading up to the 4th quarter of 2014. This happened even as credit union memberships grew by 3.3 million. Some of this lackluster growth in savings can be chalked down to the improving economy. As CUNA points out, CU members felt progressively less insecure about their jobs and incomes during 2014, so they spent more and saved less.

One other metric from the CUNA report was striking: the number of U.S. credit unions in operation declined by 63 CUs from August to September, 2014 — to a total of 6,590 nationwide. The number of credit unions fell by 274 over the 12 month period leading up to the report period.

As the recession gave way to years of hard times, many smaller credit unions failed, leading to a lot of consolidation in the movement. Larger CUs got larger, as they absorbed smaller, failing CUs. CUNA points out that this rate of consolidation did slow a bit last year, as the economy improved.

Indeed, smaller credit unions have been doing better in the past 12 months – with positive loan growth and higher earnings – than was the case during the 2007-2013 period.

But let’s get back to the one statistic we can all be positive about: credit union memberships grew by 3.3 million during the 12-months leading up to October, 2014, to reach 101.4 million. CUNA said that this represented a 3.4% increase over the previous year – and the fastest membership growth rate since July 2003.

So, while CUs face challenges in 2015, there is a lot of positive momentum, stemming both from the improved economic climate of 2014 and the success the CU movement has had in attracting new members to the fold.