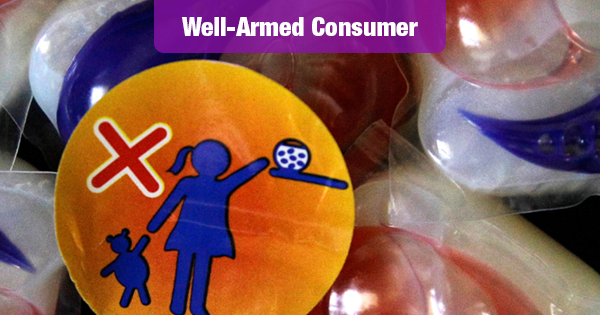 Consumer Reports said last week that it would no longer be recommending liquid laundry detergent pods due to a continued high-rate of accidental poisonings of young children attributable to these products.

In a statement, the consumer publication said that poison-control centers nationwide received more than 6,000 reports of children aged five years and younger ingesting or inhaling pods — or getting pod contents on their skin or in their eyes – in just the first six months of this year.

Consumer Reports added that its safety experts have been actively involved — in a process led by ASTM International — that has developed a voluntary safety standard for pods.

A draft proposal of those standards calls for the addition of a bittering agent to give the pods a bad taste, a higher “burst strength” to make them harder to bite into and a slower dissolve rate, so they’ll be less likely to open in a child’s mouth.

These changes have already been implemented in Europe; U.S. implementation may happen pending the outcome of a vote by the participating organizations.

For now, the safety risks that these products pose will continue to earn them a no vote from the consumer safety experts at Consumer Reports.