Chia Trump is More Popular than Chia Clinton. Should Democrats be Worried? 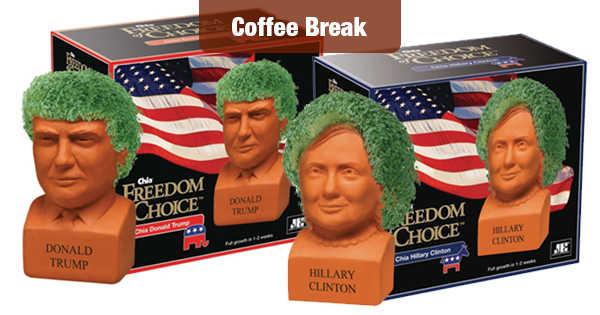 Yes, there are Chia versions of the leading presidential candidates this year. Like all Chia creatures, they grow grass out of their heads. A recent tally of sales found that the Chia Trump model is more popular than the Chia Clinton option.

According to the company that makes the clay-and-grass novelties, Chia Trump sales lead Chia Clinton sales 78% TO 22%.

Should the Democrats be worried?

We know from past elections that the relative popularity of Halloween masks of candidates can often predict who is going to win. The biggest selling mask usually looks like the winning candidate.

But would the same phenomenon hold true with Chia candidates? It did last time out, when the Chia Obama figure outsold the Chia Romney figure by 62.9% to 36.3%.

However, we’re not so sure we’d put too much store in this predictive model.

After all, Donald Trump’s hair is a key distinguishing feature of the person. With Hillary Clinton this isn’t so much the case. But who knows? With an election as crazy as this has been, maybe the “Chia poll” is as legitimate as any other predictive measure.